Have you ever posted on social media to ask if friends are nearby? “At JFK airport! Who else is here?” you write. Turns out, a friend is there — but you don’t hear about it until you’ve landed at LAX. Now you’re thousands of miles away, and missed out on a chance encounter with an old school friend.

And running into friends is great, but it definitely doesn’t happen enough. The Sup app aims to make sure you never miss out on those spontaneous run-ins, by allowing users to alert friends when they’re close by.

While social networks allow individuals to connect online, Sup helps to connect individuals in the real world. This makes it easy for friends in the same proximity to meet up to study, to grab a coffee, or just to keep each other company and catch up during that long airport layover. 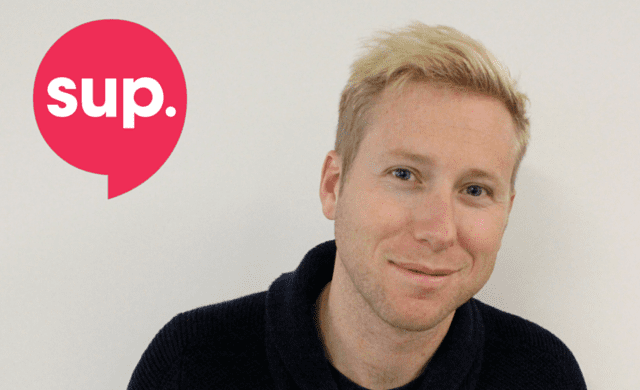 Sup app is available for free on the iPhone, Apple Watch, and now on Android. With more than 50,000 student users, it’s growing 60% each month.

With Sup, users can see where their friends are on a radar rather than a map, to reduce that self-conscious “creep factor.” The app alerts users when friends are within a 5, 15, or 25 minute walk. Now the platform has a new feature, the “Hang Out” button, which allows users to simply tap a button to notify nearby friends that they are available and they’d like to get together. Additional capabilities of Sup include a chat and text feature, and the creation of exclusive friend groups.

Founder Rich Pleeth has a strong business background. Once previously at L’oreal, Pleeth then moved on to be a marketer at Google, where duties included leading the Chrome, Search and brand marketing for the UK. After Google, Pleeth was Chief Marketing Officer at Gett, an on-demand taxi app and Uber competitor.

It was during Pleeth’s time at Gett in 2014 that the idea for Sup came about. He had flown 74 times that year, and would always check-in on social media, hoping to run into friends while travelling. However, he always seemed to miss them. Pleeth started Sup in 2015 to make it easier to catch up with friends while on the go.

Due to the growing popularity of SUP and its potential, both the app and Pleeth have been covered by many leading publications, such as Slate, Tech Insider, and Forbes.

Pleeth recently spoke to The Next Web about his time as an ex-Googler and the experiences that led him to create Sup. In the article, Pleeth also opened up about the challenges he personally faced in the London tech scene and gave valuable advice to those aspiring to be entrepreneurs and founders in the UK.

Inquisitor also raised the profile of the app late last year when it reported that Taylor Swift had been using it in her own special way.

The uptake of the app by students across has shown SUP’s potential, which is already evident in the rapidly growing number of users. Because the app is still in its early stages, Pleeth and his team are constantly looking to improve the platform by proactively gathering feedback from users and running dynamic focus groups.

The new “Hang Out” feature is just one example of the expansion of the app and its goal of making those special and spontaneous catch up moments with friends happen. Ultimately, SUP is committed to breaking down the walls put up by social media networks that are having the opposite effect on us and making us increasingly anti-social.

By creating an easy to use and fun app, and expanding its capabilities, Sup will continue to make those chance encounters with friends happen more often.

Where to go next? Take our PR preparedness quiz and find the resources suited to your current PR needs.

What is the Real ROI From Media Coverage?